The Nevada county commissioner who told Miriam Shearing (Philosophy BA, ‘56) that women don’t belong in the courtroom could never have predicted how those words would motivate Shearing throughout her life, eventually leading her to the state’s top judicial position, chief justice of the Nevada Supreme Court.

“I knew I wouldn’t get an appointment (from that county commission). I realized that if I want the job I would have to run for election, so I became a politician,” said Shearing, who retired from the Nevada Supreme Court in 2005. “On the campaign trail, every once in a while I encountered a man who told me to go home and cook dinner, but on the whole people were very ready for having a woman judge. Many said ‘It’s about time!’ “

From Justice Court to District Court to the Nevada Supreme Court, Shearing mastered the art of campaigning, fund raising and running for office. And as a judge in the various courts, she dealt with all types of cases, from small claims and traffic violations to personal injury, construction defects, child abuse and murder.

She broke gender barriers, not once but four times, as the first woman to serve as Las Vegas justice court judge, as a Nevada district judge, as Juvenile Court judge and then as justice and chief justice of the Supreme Court of Nevada. During her career, she was pushing for justice for all litigants, but especially for women, children and people of color in a justice system that is sometimes biased against them.

All from a humble beginning on a farm in Spencer, N.Y., outside of Ithaca where “we had no lawyers. I don’t think I ever talked to a lawyer before I went to law school,” Shearing said. Though once she did get to law school, “I knew that this was where I belonged all along.”

Shearing recently made a generous gift to support the College of Arts & Sciences’ New Frontier Grants in honor of her 65th Reunion, saying she was inspired by her classmate, Chuck Feeney ’56. 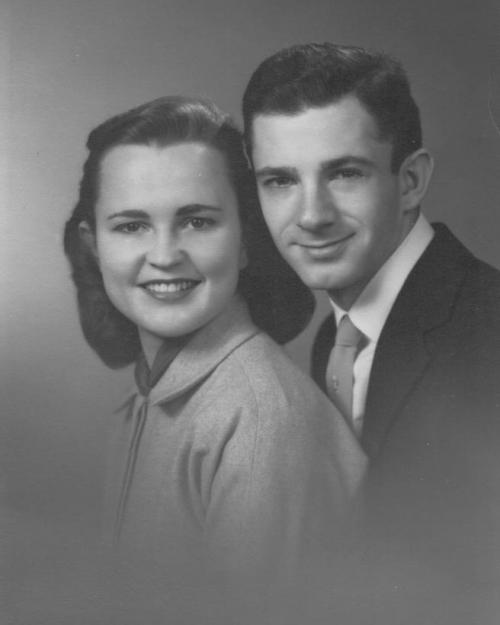 Miriam Shearing '56 met her husband, Steven Shearing ‘56, at Cornell and they married before their junior year. They took this photo in 1954 when they were back on campus.

At Cornell, she met her future husband, Steven Shearing ‘56, and they married before their junior year. Steven Shearing was a history major, but he would go on to become an ophthalmologist and a pioneer in cataract surgery.

After graduation, she worked for a few years at an Army research and engineering facility while her husband attended a graduate program in history. When he switched gears and decided to attend medical school in Boston, Shearing took a leap and decided to apply to law school. “I knew I wouldn’t be seeing much of him for the next four years, so I thought I might as well acquire a profession,” she said. And from the first class, “I liked everything about law school.”

When she moved to Nevada in 1969, Shearing became a lawyer and began practicing law. Then she had the opportunity to substitute as a referee in juvenile court and discovered she enjoyed being a judge even more than being a lawyer.

That was when she ran into the county commissioner.

And the rest is history.

She was able to fight for her voice to be heard, especially on behalf of the voices of all women, children and others often disadvantaged in the courts.  She was proud to be in the position to do so.

“Whatever position I had, I was never bored. I dealt with such a wide variety of cases and issues and I discovered that I really enjoyed writing opinions,” she said.

As Shearing ascended the ladder of the Nevada judicial system, she showed other women they could also be judges. She also made efforts to help other women who came after her. She spoke at courses to tell women about the process of becoming a judge and offered guidance to young women attorneys interested in judicial careers.

In 2019, the Nevada Board of Regents named Miriam a recipient of the Distinguished Nevadan award, the Nevada System of Higher Education’s most prestigious honor. These days, she continues to be involved with literature through her involvement with the Black Mountain Institute at the University of Nevada Las Vegas.

An Empirical Turn in Ethics

The Cognitive Science of Philosophical Thought